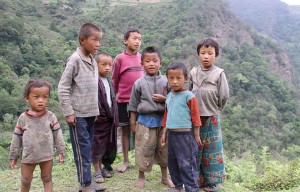 There are over eighteen dialects spoken in the country. The national language is Dzongkha. Bhutan’s linguistic richness is attributed to it being a closed society for a greater part of its existence. Other important languages include the Tshanglakha and the Lhotshamkha. While Tshanglakha originated from the Tshanglas of eastern Bhutan, Lhotshamkha is essentially the language of Southern Bhutanese of Nepali origin. Other dialects include Khengkha (Khengpas of Central Bhutan), the Bumthapkha (Bumthaps), Mangdepkah (native to Trongs). Other communities like the Tamangs, Lepchas and the Sherpas too have their own dialect. Monkha and the Gongduepkha are two dialects that are facing the threat of extinction. 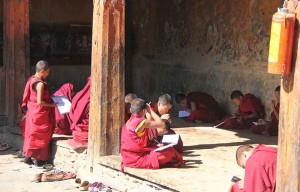 Predominantly a Buddhist state, Vajrayana Buddhism is the main form practiced among people. First introduced by Guru Rinpoche in the eight century, Buddhism took firm roots in the country. Nyingmapa (the ancient or the older) school of Buddhism was propagated by him.

Another school of Buddhism – the Drukpa Kagyu (the state religion today) was introduced in Bhutan by Phajo Drugom Zhigpo’s from Tibet in 1222. Later on this form of Buddhism took hold in most part of western Bhutan.

In 1616, Zhabdrung Nawang Namgyal arrived from Tibet and managed to unify the country and give it a unique identity of its own. He brought various Buddhist schools under his control & is considered as a significant figure in history of Buddhism in Bhutan.

The Buddhist influence can be witnessed in the many monasteries, Stupas, prayer wheels and flags that are seen throughout the landscape. The monks in bright red robes are an important part of the society & their presence marks all the special events and occasions in Bhutanese society.